If you’re looking for the traditional fried green tomato recipe made famous by the book “Fried Green Tomatoes at the Whistle Stop Cafe” by Fannie Flagg,  you might want to look elsewhere.  But if you’ve never had them before (and don’t even know who Fannie Flagg is), and would like to taste fried green tomatoes “Savvy Sister Style”, then grab some un-ripe tomatoes, some coconut milk, and your old black skillet and get ready to cook up a Vegan Southern Treat that would even have Scarlet saying “I do declare, I believe I’ll go vegan today, Rhett.”  To which Rhett will say, “Frankly my dear, I don’t give a quinoa.”

A vegan twist on an old southern favorite.  As soon as you have them…they’ll have you.

I’ve taken the same sliced green tomatoes and battered them with coconut milk, breaded with panko crumbs and Old Bay, and pan fried in sunflower oil topped with a sweet Veganaise sauce.  I like Kikkoman Panko because of their short ingredient list, but any brand will do. Anyone who knows me knew that I would use Old Bay in this recipe as I am addicted to the stuff.

All tomatoes, green or otherwise, are high in vitamin C, vitamin A and vitamin K. The stems and leaves of the tomato plant contain tomatine, a human toxin in high doses.  But the green tomato, while containing tomatine, is in such an amount that it has actually been shown to strongly inhibit cancer growth in breast, colon and liver cancers.   This toxin also makes the fruit more alkaline and less acidic, which is found to be extremely beneficial for overall health.  Red tomatoes lacked sufficient levels of the beneficial tomatine to be called “cancer fighting” and are also more acidic.  Those that can’t eat red tomatoes because of their acidity, should try these. (although I would recommend the baked version)

I’ve been getting my green tomatoes from the farmers market.  There’s one in every town, and I’m sure if you search your town you’ll be surprised how close your is.  I am not aware of any “chain” market that carries the greenies.  Look for greenies that are 100% green and very firm to pressure, almost like an apple.

The one on the left is OK, but the one on the right is perfect because it is totally green (yes, I do think these look like alien boobs)

Since green tomatoes are simply un-ripe red tomatoes, you must cook them within several days of acquisition or you’ll be frying yellow, orange or pink tomatoes, and those just don’t taste the same.

2.  Place 2 cups Panko crumbs with the olive oil and Old Bay in a bowl. Mix well and set aside.

3.   Make an assembly line with the sliced tomatoes first, then the flour, then milk, then panko, then onto a clean plate. 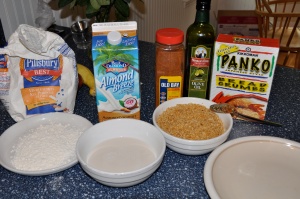 4.  Coat a slice in flour, then dip in the milk.  (I caught a lot of flack from true southerners about the order of the flour and the milk.  The original recipe dips in milk first then the flour. I don’t do it that way. And there is nothing you can say to make me change. I’ve tried it both ways and I think this way works best for this recipe. Get over it.)

5. Then coat with the crumbs.  Press the crumbs into the slice with the back of your fork on both sides.

6.  Continue with all slices. When you have coated all your slices, bring them over to the stove top.  Heat 1/4 cup cooking oil in a 10 inch cast iron skillet on medium high heat.  When a crumb dropped into the pan bubbles, it’s ready for the tomatoes.  Cook about 3-4 minutes on each side until golden brown.

Add oil to each batch.  You  may have to scoop residual crumbs out of the pan between each batch so they don’t burn.  Continue until you’ve cooked all the slices.

To reduce fat and calories you can bake them instead of frying.  Prepare as above and place on cookie sheet sprayed with cooking spray.  Broil on the second from top rack position 450 degrees F (top broil setting) for 4-5 minutes each side (watch closely) until golden brown.

To make the sauce:

Combine Veganaise with syrup and lemon juice.  Mix well and top tomatoes.  If you have some sweet corn salsa that is also good on top of the topping.

I always burn the top of my mouth when I make these because I can’t wait to eat them.  I suggest making more than you think because these go down easily and you just want more.

The perfect snack to go with your mint julep while listening to Dixie on the porch swing.

Nutrition per slice baked: Calories: 51 Fat 1.5 gm all other nutrition the same